Stanislav Shekshnia analyzes the nature of the economic crisis and its influence on the interaction between employees and leaders. In particular, he talks about how employees need stronger leadership in times of crisis, and what the most effective model is.

TEI: How do Leader-Employee relations change during crisis?

Stanislav Shekshnia: I would like to make a small segue and talk about the crisis in terms of “what it is.” It is common place to compare the current economic crisis with other crises — floods, fires, earthquakes — and to look for an answer to the question of how to effectively run an enterprise during an economic crisis through an analogy with managing people in a fire or a flood. I do not feel that this comparison is productive.

Economic crisis is a long process, in which a new equilibrium is set between factors of production, i.e. labor, capital, and natural resources, in terms of their relative productivity and value. A peculiar “re-evaluation of values” takes place in the economy, redefining proportions among sectors, industries, enterprises, workers etc. Moreover, it does not happen in one moment, but rather takes several iterations through trial and error, and the most illustrative case is the significant volatility of stock and goods markets. Hence, the job of a top-manager running the company during crisis is not a one-time heroic act of saving a ship caught in storm, but a long-term activity, ensuring not only the survival of the vessel, but also its substantial modernization, such that would allow it to sail successfully through an ocean that is different from what it has been. From that point of view, the same type of management is needed in times of crisis, as in times of growth: effective management, which combines strategic decision-making and effective implementation.

At the same time, crisis makes the situation more difficult, primarily insofar as the human psychological state is concerned, which applies as much to employees and as to managers. Today, like during previous crises, we observe two leadership paradoxes. The first paradox is that employees when under stress caused by crisis experience a much greater need for leadership than under stable circumstances or during growth.They are ready to sacrifice asignificant share of their freedom and independence in exchange for what the leader can give them — a belief in their future, direction, and tools that help them achieve goals. The paradox is that many managers are not only incapable of “adding” leadership, but also unable to keep management at the same level. While the followers reach for their leader, s/he almost runs away from them.

Many would recall the famous story about Stalin, who locked himself up at the “near datcha” (country cottage outside of Moscow) after learning about Germany’s attack on the Soviet Union, leaving the Politburo and the country without leadership. His associates, who were used to a very directive style, felt absolutely lost and, despite their fear of infuriating the Chief, went to his residence for directions. Stalin, on his part, thought that they had come to arrest him...

Leaders flee leadership during crisis because they are affected by stress, like normal people. Crisis transforms the world in which they lived; mental models and management tools that they were used to stop working; the degree of uncertainty rapidly increases — all that causes stress even in mature, confident managers.

TEI: How can one avoid such a reaction?

Stanislav Shekshnia: Let us recall some examples of those who managed to do that. When Rudy Giuliani, New York City mayor in 2001, learnt about the attack on World Trade Center, he asked his driver to stop the car, got out, and took a half-hour walk in the park, reflecting on the event and its consequences. In the following hours and days he became the symbol of calmness, confidence and resolve for millions of New Yorkers.

In order to be effective during crisis, a leader must calm down, restore internal emotional and intellectual balance,“actualize” his/her own goals in the new situation — i.e. gain sight. If this does not happen, primitive psychological defence mechanisms are turned on — s/he starts imitating others’ behaviors, making a show of frenzied action, or vice versa, becomes inactive, pacifying oneself that everything will be back to normal, that there is really no crisis at all, just some temporary difficulties. Unfortunately, we observe such mechanisms in every step: companies run 20% layoffs across all divisions or stop all investment projects, freeze all vacancies or cancel all development programs. Top-managers work 7 days a week, conduct endless meetings and…change nothing in their business model or their service offering. This is what one consulting company did, when it cut its personnel by 15%, salaries by 20%, and kept its fees the same, because according to its Director, “the value of our product has not changed”. Such an approach can ensure survival in a storm, but can not prepare for sailing through a new ocean. Top-manager’s job is such that his actions and in actions always have along-term effect, and his irrational reaction today can result in destruction of competitive advantages tomorrow and the day after tomorrow.

In order to avoid irrational behavior, the top-manager, first of all, has to reach the state of internal peace. For that one needs time, secure space, a combination of readiness to face the truth and keep in mind long-term perspective and positive outlook. To get there, some leaders need a listener, whom they trust, while others just need to be alone with their thoughts. Crisis relativization, comparing current events and its consequences with fundamental values and events in the past, is another very efficient tool in restoring the internalbalance.

TEI: Is restoring this balance enough for effective leadership during crisis? Can any leader who managed to pull together achieve results or crisis management requires special competencies or leadership style?

Stanislav Shekshnia: This is where we get to the second paradox. People who are under stress have a pretty clear understanding of what the leadership that can help them in this situation should be like. From the moment when the current crisis started, I have been asking employees of various companies what sort of leaders they need. I always got very similar answers: directive, quick, self-confident, “knowing answers to all questions”, tough, and uncompromising. Every time, I would picture Peter the Great in my mind — this is how the great Czar is portrayed in the popular memory.

It would seem that the model is quite clear and even intimate to the leaders in Russia, Ukraine, Kazakhstan and many other developing markets — which means they should effectively get through the crisis. However, for the most part it does not happen like that. Instead of effective crisis management, we see everywhere examples of how one should not run business in turbulent times — constant changes in direction, imitation of frenzied action and others’ behaviors, cuts of everything, inefficient communication or even lack thereof. Of course, one of the reasons for such actions is the stress, which we talked about before. However, another reason, which is as important, is the erroneous view of what type of leadership is effective during crisis. Many studies have demonstrated that “Peter the Great” model is not effective for people management during crisis and observing how the current crisis develops support this.

TEI: But why? Didn’t Peter implement reforms that were extraordinary in scope in an underdeveloped country with illiterate population...

Stanislav Shekshnia: Precisely — an illiterate population! In the early stages of a crisis, people experience heavy stress, which is accompanied by decreasing intellectual capability, abrupt shortening of time horizon, stronger negativism, and overall contraction of rationality and expansion of the unconscious. Fear of the unknown becomes the most important motive of their behavior. This is why they expect Peter to come with a stick, ready solutions, and live demonstration of what is to be done.

«...many managers are not only incapable of ‘adding’ leadership, but also unable to keep management at the same level»

However, unlike those people from Peter’s era, modern employees, educated, spiritually and socially developed people, cannot remain in such state for a long time. They would inevitably start asking questions, born out of higher order human needs, — “Why did this crisis happen? Who is to blame for the current situation? What have I done wrong? How can we get out of the crisis situation? What can I do to help?” etc. Both the stick and the “Do it like me” motto, are inadequate to manage such people. During crisis, only top-managers who are capable of combining their attention to business with attention to people, who actually “do” this business, can be efficient. I know that thisis very difficult, especially with the high uncertainty, new inputs, and key market proportions changing all the time. But at the same time I know people who manage to do this. And though there is a great variety of styles, they share some common behaviors.

First of all, they radiate optimism. Not the unfounded confidence, à la “We are many, we’ll get through, guys”, but a sincere belief in the ability of the organization not just to overcome the crisis on their own, but get out of it stronger than others. This belief is based on rethinking of the environment, goals of the company, its business model, a rethinking that they have already done or are currently doing, actively engaging others and telling the entire organization about the results..

Secondly, they demonstrate what psychologists call “empathy”, an ability to put oneself in another person’s shoes, to feel what another person feels. These people do not pretend to be “men of steel”, but actively use their emotions to support their employees. They actively talk about their employees’ problems, sympathize and share their worries and feelings. Furthermore, they also demonstrate the readiness to share the crisis burden — lower they compensation, cancel their own benefits and privileges.

Third, they demonstrate a combination of flexibility, adaptiveness, and strategic vision. Effective leaders are very attentive to the outside world, they interpret its signals, actively looking for feedback, they analyze new information and make decisions and correct company’s behavior based on it. At the same time, they do not lose track of the strategic perspective — values and competitive advantages of the company — and do not slip into a reactive model. As one of such leaders said, “Now we need to act fast, but we also have to think more thoroughly”.

Fourth, they not only create psychological comfort for their people, but also provide instruments and mechanisms of work in the new situation, a kind of operational platform. These mechanisms are imperfect, but they allow to fill the newly-formed vacuum.

Finally, effective leaders do not forget about their main role: organizational development and company improvement. With limited resources and capabilities, they nevertheless develop employees, attract stellar candidates from the market, improve processes and organizational competencies, so that when the new proportions are finally in place the company could make another leap to the top.

This publication is part the first issue of Talent Equity Newsletter "Leadership and Crisis". 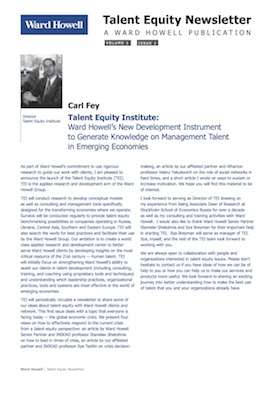